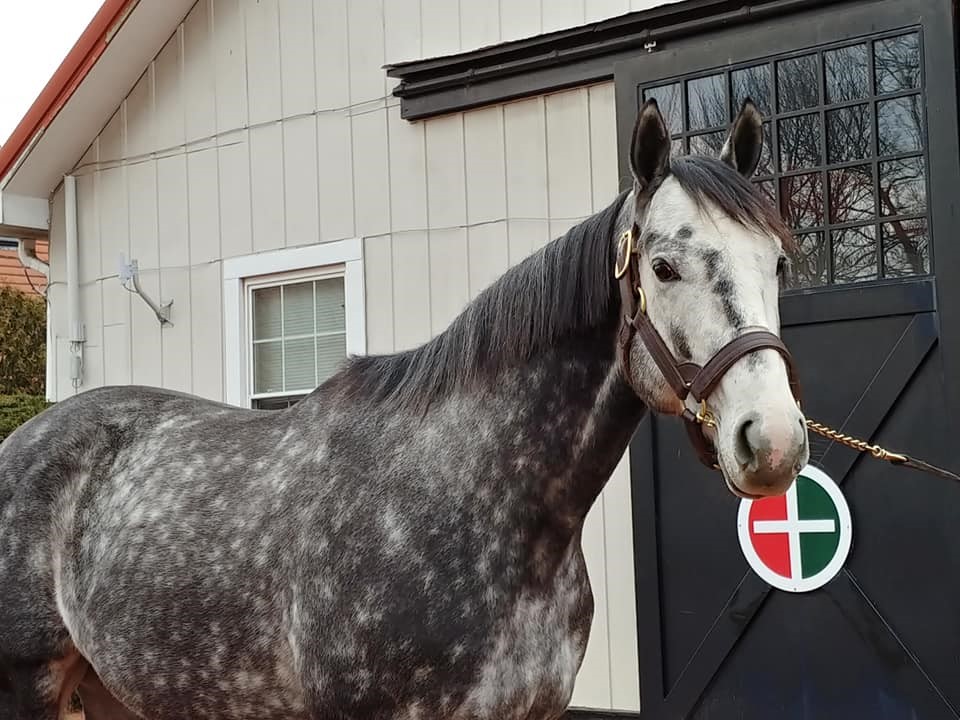 The recent polar vortex here in the Midwest has left us all bundled up tightly, just determined to stay inside for as long as we can.  Before this chilly weather set in it was a balmy 47 degrees here in Kentucky, so it was a perfect time to do some stallion farm visits before the start of the 2019 breeding season. 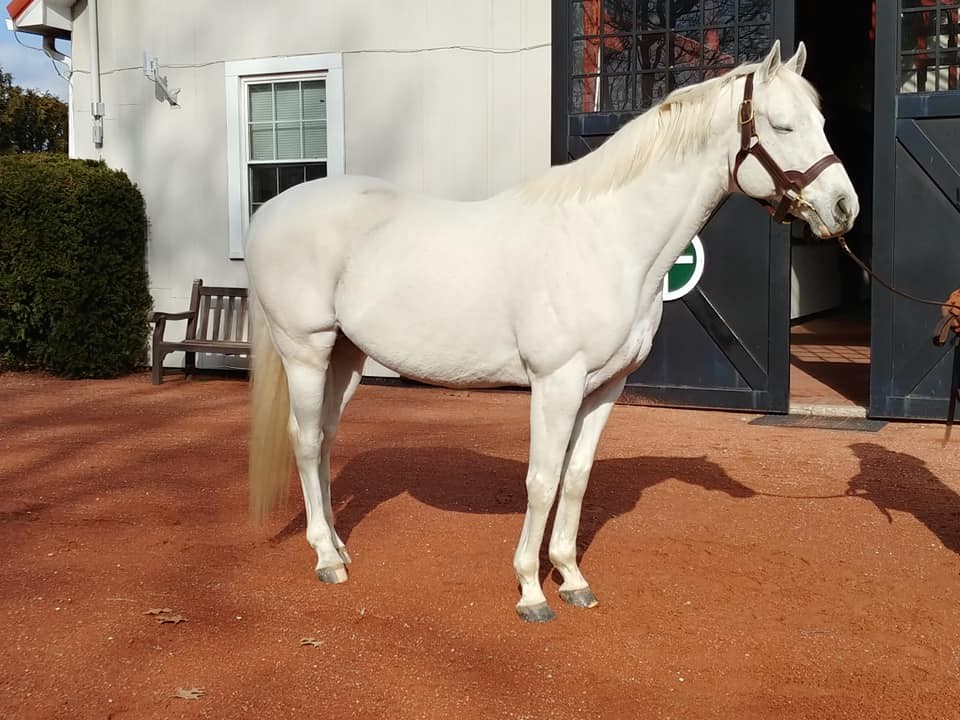 A son of Pulpit from the Unbridled mare Tap Your Heels, Tapit sold as a yearling at the 2002 Keeneland September Yearling sale, where he was consigned by Fred Seitz, agent.  David Fiske picked up this grey colt for his clients (Winchell Thoroughbreds) for the sale price of $625,000.  One year later, he broke his maiden first time out in Maiden Special Weight company at Delaware Park.  Tapit came back less than a month later in the Grade 3 Laurel Futurity, where he made a bold move in the stretch and won by over four lengths.  He also earned a career high of 106 Equibase speed figure rating.

After a flat sixth place effort in the Grade 1 Florida Derby, Tapit came back to win the Grade 1 Wood Memorial Stakes at Aqueduct–which set in stone his path to the Kentucky Derby.  A slow break from the gate and the traffic of the field cost him the Kentucky Derby, which went to eventual Preakness Stakes winner Smarty Jones.  After another flat effort a few months later in the Grade 2 Pennsylvania Derby, Tapit was retired with a (3-0-0) record from six lifetime starts and earnings of $557,300.

What he lacked at the racetrack, he made up for in the breeding shed.  Tapit has been a record-setting leading sire three times in North America, with combined worldwide earnings over $140 million.  He currently commands a stud fee of $225,000, which may not sound so steep since he has been America’s No. 1 Yearling Sire for five-straight years, with almost $30 million in yearlings sold.  Tapit’s command of the sale ring has put his offspring in the capable hands of top owners and trainers that have campaigned champions such as UNTAPABLE (champion 3-year-old filly), STARDOM BOUND (champion 2-year-old filly), HANSEN (champion 2-year-old colt), UNIQUE BELLA (champion female sprinter) and over 100 other stakes winners.  His combined sale and progeny earnings over $447 million.

Tapit is not the only grey shinning star at Gainesway Farm.  This year also starts the breeding career of one of Tapit’s top sons, classic winner and stakes-record setter – TAPWRIT ($1.3 million).

A $1.2 millionr yearling out of a Grade 1-winning Successful Appeal daughter named Appealing Zophie, Tapwrit headed right to the barn of top trainer Todd Pletcher for his new connections.

A winner in his second race at 2-years-old, Tapwrit finished off 2016 with a win the Pulpit Stakes at Gulfstream Park.  He came back in February of his 3-year-old year with a second place finish in the Grade 3 Sam F. Davis Stakes at Tampa Bay Downs to multiple graded stakes winner McCraken ($869,728). Tapwrit was Derby Trail-bound and followed that with a win in the Grade 2 Lambholm South Tampa Bay Derby, where also posted a career best 111 Equibase speed rating.  A steadied sixth place effort in the Kentucky Derby’s field of 20 was followed by two-length win in the Grade 1 Belmont Stakes over a tiring Irish War Cry.  After the Belmont Stakes, Tapwrit never found his way back to the winner’s circle.  He ran an even fourth in the Grade 1 Travers Stakes at Saratoga later that summer, defeating Derby winner Always Dreaming and previous winner McCraken. 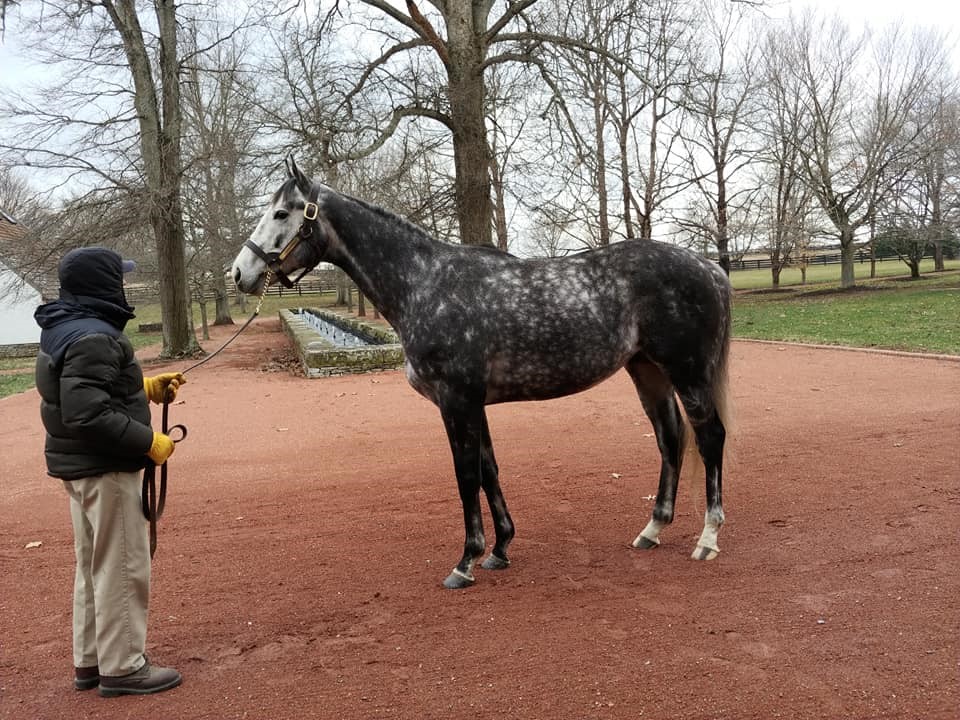 Celebrating his 19th Birthday this year is the world traveler, Empire Maker.  A homebred son of Unbridled from Juddmonte Farm, this royally-bred colt is out of 2002 Broodmare of The Year, Toussaud–another Juddmonte homebred, who is the dam of five Grade 1 winners.  Empire Maker was a winner in his first start for trainer Robert Frankel and soon followed up that win with a victory in the Grade 1 Florida Derby.  From Florida to New York, he won back-to-back starts with a win the Grade 1 Wood Memorial before running second in the Grade 1 Kentucky Derby to fan favorite Funny Cide.  Empire Maker later made it known he was the king with a win in the Grade 1 Belmont Stakes, thus ending the Triple Crown bid for Funny Cide and also posting a career high 115 Equibase Speed Figure.

Juddmonte Farm got his stud career rolling but shocked breeders in 2010 with the announcement that Empire Maker had been sold for stud duties to Japan.

With the success of offspring such a Pioneerof the Nile, three-time champion Royal Delta, and sire Bodemeister, it was an easy decision for the owners of Gainesway Farm and partner Don Alberto Stud to partner 50/50 to purchase the stallion and ship him back to the United States.  He became a valuable addition to their stallion roster with the success of Triple Crown champion American Pharoah (the son of Pioneerof The Nile), who had retired to stud down the road at Coolmore.

One Reply to “Visiting with the Super Stallions at Gainesway Farm”